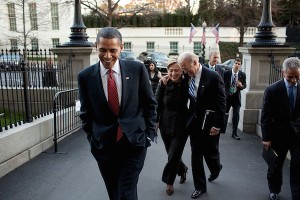 If there were any lingering doubts over President Barack Obama’s legacy on LGBT rights, the nation’s first African-American president appeared to wipe them away last week.

On June 16, after years of pressure from outside groups, the White House announced that Obama would sign an executive order prohibiting federal contractors from discrimination on the basis of sexual orientation and gender identity. The news that Obama would at last act on something he said he would do when running for president in 2008 was greeted with applause — and relief — from LGBT advocates previously puzzled by inaction on the executive order.

Days later, the Obama administration announced additional actions against Uganda, including cuts in aid and restricting entry to the U.S. by certain Ugandan officials, for the implementation of an anti-LGBT law earlier this year. The move, advocates say, sets a precedent for dealing with other countries considering laws that target LGBT people.

And then on Friday, the Obama administration concluded what is being called the vastest conferral of rights to LGBT people in American history. In a memo to President Obama, Attorney General Eric Holder announced the completion of the administration’s implementation of last year’s U.S. Supreme Court decision striking down Section 3 of the Defense of Marriage Act, ending the federal government’s definition of marriage as between a man and a woman.

“I am pleased to report that agencies across the federal government have implemented the Windsor decision to treat married same-sex couples the same as married opposite-sex couples for the benefits and obligations for which marriage is relevant, to the greatest extent possible under the law,” Holder wrote.

On Friday, the Labor Department also announced it is proposing a rule change to the Family and Medical Leave Act (FMLA) clarifying that employees are eligible for leave to care for a same-sex spouse, regardless of whether they live in a state that recognizes same-sex marriage. The Social Security Administration and the Department of Veterans Affairs announced additional guidance for same-sex couples, while noting that they cannot fully extend benefits until areas of federal law are updated by Congress. Meanwhile, both Holder and the White House renewed their calls on Congress to pass legislation that would correct areas of federal law that continue to prevent the extension of benefits.

Judging by the reaction from advocates, such steps have cemented Obama’s legacy as the greatest ally the LGBT community has ever known to occupy the White House.

“President Obama’s advocacy on behalf of LGBT people is nothing less than historic. There is no question that the lives of LGBT people today are immeasurably better today than they were before this president took office,” said Chad Griffin, president of the Human Rights Campaign, in a statement. “The administration’s sweeping interpretation and implementation of the Windsor decision has led to [the] greatest conferral of equal rights, benefits and obligations to LGBT people in our nation’s history. In record time, Attorney General Holder has moved heaven and earth to guarantee equality, and the LGBT community could not ask for a better partner in progress.”

Since taking the oath of office in January 2009, Obama has checked off a long list of LGBT accomplishments. The first sitting American president to openly endorse same-sex marriage, he has all but ensured that a Democrat will never again be able to run for the White House without supporting marriage equality. Under his direction, Attorney General Eric Holder and the Justice Department ceased defending DOMA in federal court. When the Supreme Court heard arguments in same-sex marriage cases for the first time in March 2013, Obama’s solicitor general, Donald Verrilli, urged the Supreme Court justices to strike down DOMA as well as California’s same-sex marriage ban. The repeal of “Don’t Ask, Don’t Tell” bears his signature, and the White House has indicated his openness to at least a review of the military’s existing ban on transgender service. Early on, Obama endorsed the Employment Non-Discrimination Act (ENDA) and promised to sign it into law when it reaches his desk. He also signed the reauthorization of the Violence Against Women Act (VAWA) with new LGBT protections, helped enact hate crime legislation, lifted the ban on people with HIV traveling to the U.S. and made the human rights of LGBT people a key plank of his foreign policy.

Of course, there are issues that remain, and Obama has rarely been out front of such issues — and at times seemingly a step behind his vice president, Joe Biden, who not only endorsed marriage equality two days before Obama but also expressed support for the executive order in April. But last week’s movement on LGBT-rights by the Obama administration builds upon a record that is unparalleled in American politics, and one that Obama has conveyed pride in. He has openly spoken about the struggles of not just gay Americans, but also transgender Americans, in settings as varying as interviews with television and print media outlets to high profile speeches such as his second inaugural address.

Through words and actions, Obama has not only solidified his legacy on these issues, but also his political party’s reputation as the stalwart supporter of LGBT rights at a time when public opinion is increasingly shifting in favor of equality. What once was a wedge issue used by Republicans against Democrats is increasingly becoming one used by Democrats against Republicans, including by Obama himself.

“So now you flash back 10 years ago. Maybe no single issue divided our country more than same-sex marriage,” Obama told LGBT donors last week at a fundraiser for the Democratic National Committee in New York City. “In fact, the Republican Party built their entire strategy for 2004 around this issue. You remember? They calculated that if they put constitutional amendments banning same-sex marriage on state ballots, they’d turn out more voters, they’d win. And they, frankly, were right. People flocked to the polls. Those amendments were on the ballots in 11 states. They passed in every single one. Now, here’s a good bet. They’re not going to try the same strategy in 2014.”

Later in that speech, Obama took note of the Texas Republican Party’s recent endorsement of “ex-gay therapy” in their official party platform, something that has done no favors for the national GOP’s rebranding efforts. Texas Gov. Rick Perry, who ran for the Republican presidential nomination in 2012 and has not ruled out another run for the White House, has been asked about the issue repeatedly by national reporters since comparing alcoholism to homosexuality earlier this month. (Perry has since admitted he “stepped right in it” with his remarks, but has not retracted his analogy.)

“Democrats want to talk about anything other than jobs and the economy, and Republicans should only be talking about jobs and the economy. If there is one key takeaway from the 2012 election cycle, it’s that Republicans took their eyes off the ball and allowed themselves to get sidelined on social issues,” says Gregory T. Angelo, executive director of Log Cabin Republicans. “In 2012 the Democrats spun the Rove ’04 strategy on its head and used support for LGBT issues as a wedge — and it worked.”

Indeed, in the 2012 presidential election, LGB voters made up 5 percent of the electorate, 76 percent of whom voted for Obama, according to exit polls.

With Democrats largely onboard with LGBT rights (every Senate Democrat voted to outlaw LGBT workplace discrimination in November while only three Senate Democrats have not yet openly endorsed same-sex marriage), the rate at which some have evolved has even become an issue. During a recent interview with NPR, Hillary Clinton defended her decision to only endorse same-sex marriage in March 2013, shortly after leaving her position as secretary of state, and denied that she hid her support for marriage equality for political gain. “When I was ready to say what I said, I said it,” Clinton stated. Most notably, Clinton also said she believes marriage should be left up to the states and expressed her support for state-by-state efforts to secure marriage equality, a position that contradicts the majority of marriage-equality advocates who believe a national resolution must come from the Supreme Court.

At a time when Clinton’s views on marriage equality are back in the public eye, Secretary of State John Kerry appeared to further illustrate Democrats’ full embrace of LGBT-rights and the scramble to claim credit for who got to the finish line first when he said at an event marking LGBT Pride Month that he is “proud to be the first sitting Secretary of State to support same-sex marriage” and noted he was one of only 14 senators to vote against DOMA, which was signed by President Bill Clinton in 1996.

Republicans, meanwhile, are increasingly unwilling to fight the issue, let alone talk about it. At the National Organization for Marriage’s anti-gay marriage rally last week, Kansas Rep. Tim Huelskamp was the only current member of Congress to attend. The issue of marriage equality was also largely absent during last week’s Faith and Freedom Coalition’s “Road to Majority” conference, where potential Republican presidential candidates such as Gov. Chris Christie and Sens. Ted Cruz and Rand Paul chose to focus on other issues. Those who did address LGBT issues, such as Gary Bauer, president of American Values, aired their anti-LGBT views while having little to lose politically (Bauer accused Obama of being “obsessed” with the gay-rights agenda).

During a Monday interview with CNBC’s Squawk Box, Republican Sen. Ron Johnson (Wisc.) said it’s not social issues that matter, but economic issues that “overweigh all the other ones.” But when pressed on how Republicans will win elections if voters disagree with them on such issues as same-sex marriage, Johnson went further, arguing the GOP should follow the will of the voters.

“I think we first have to recognize that these social issues are going to primarily be decided in the states through democratic process and that’s the why it should happen. I’ll certainly go with the judgment of the American people on terms of where they want to fall on, whether it’s abortion issues or whether it’s gay marriage or whatever,” Johnson said. “Let the voters decide that.”

But while Republicans may want to focus on other issues, Democrats, and a growing majority of voters, may not let them. During his speech at the DNC’s LGBT fundraiser, Obama encouraged those who in the past might not have enjoyed the full liberty America has to offer to focus on those still struggling.

With Republicans increasingly hesitant to waste political capital wading into the culture wars, such a clarion call provides a glimpse of the progressive coalition Obama has helped forge — and one Republicans, despite their outreach efforts, have done little thus far to break apart.

“If you’ve experienced being on the outside, you’ve got to be one to bring more folks in even once you are inside,” Obama told the crowd of donors. “That’s our task. That’s our job. That’s why we’re here tonight.”

From: Metro Weekly, News
← Marriage-equality foes falter in face of an evolving nation
As ENDA support falters, Republican backers dig in →
No comments yet